I like to play guitar now and then and if there’s something that’s a lot of fun to mess around with, it’s Van Halen. You probably remember Jump and the Top Gun theme as some of his more memorable pieces. One of my favorites is Panama. But have you heard him play this number?

The first 1:40 of that video is his guitar solo titled Eruption. Those who play guitar know how ridiculously complicated that solo is.

That’s why she won the internet.

Meet 14-year-old girl Tina, who can play Eruption like it’s not big thing—like the effort kind of bores her. Keep your hands under your eyelids in case those eyeballs pop out, and press play.

Well done Tina! I hope you go on to be the female rock star that trumps all rock stars.

What did you think of the video? Impressed? Had you heard Eruption before today? Who’s your favorite guitarist?

I’ve mentioned plenty of times how Amazon seems to eat up a substantial amount of my paycheck. I love that store a little too much. I mean let’s not talk about how I stayed up WAY too late on Tuesday night playing Tomb Raider that Amazon shipped to me for game day release. *awkward eye shifting* Don’t ever make me hate you Amazon. Promise? Please!

Anyways, I don’t know if I mentioned, but recently I picked up a Kindle. A friend of mine had just picked up a Kindle Fire not so long ago and was looking to dump her older one, a 2nd gen (of the original series). She hooked me up with a sweet deal and here I am Kindle, here I am!

And speaking of Amazon, that brings me to… 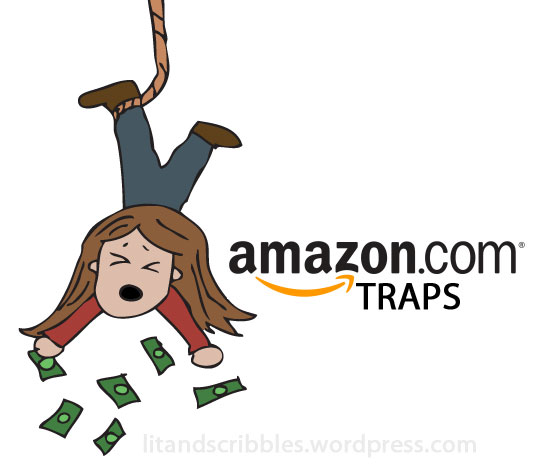 But first let me explain Amazon traps. Amazon offers you something you want at a price you can’t refuse. Feels eerily like the Godfather, although I guess Amazon doesn’t send anyone to break your thumbs. At least…I hope not… *glances over shoulder* Ha! Who am I kidding? I haven’t refused any deals! So back to the deal.

The Emotion Thesaurus. Something wise I think every person who ever puts an e-book on Amazon should do is offer samples. It’s potentially an Amazon trap because just as you’re getting into the book, “Oh, that’s the end of your sample. But all you have to do is click this button and for $CHEAP$ you can have the rest.” What? Sign me up!

That’s what happened with the Emotion Thesaurus. It’s a writer’s resource. Not sure whose blog I read it on first (I follow over 200 of you, you know). But I’m sure glad I did. The book lists basic emotions, then has a list of suggestions for the body language of that emotion, other related emotions, and different ways of looking at expressing the emotion so you have something better than: Johnny was angry. You don’t copy one of the suggestions, the idea is that it will help inspire you for your own. You think about your character and decide what they would do, or dig deep into yourself and think about what you would do.

I’ve already found it to be a helpful resource. And guess what folks? It’s available as a sample! (And available for $5 on the Kindle if you get trapped. You can also buy a physical book if that’s how you roll).

$2.99 MP3 Albums. I’ve mentioned cheap music before, but this time Amazon sweetened the pot. First up is Best of Van Halen. Now not all of the songs on the album are some I 100% love, but you’ve got to approach this realizing it’s usually $1/song. If you can get 17, most you like, that’s a smokin’ deal. Among my favs: Ain’t Talkin’ ‘Bout Love, Runnin’ With The Devil, Jump, Panama, Why Can’t This Be Love, Dreams, When It’s Love, Right Now, and Can’t Stop Lovin’ You. Woot!

Next they got me with Complete Greatest Hits by The Cars. 20 songs for $3. Among my favs included: Just What I Needed, Good Times Roll, You’re All I’ve Got Tonight, It’s All I Can Do, Shake It Up, You Might Think, Drive, Magic, and Hello Again. Score!

Did I mention I also picked up Footloose? Oh yes, Footloose, Let’s Hear it For the Boy, Almost Paradise, Holding Out For A Hero, I’m Free, Hurts So Good, Waiting For A Girl Like You. Ahem. Amazon, I need a commission for all this recommending I’m doing. Or at least some Amazon credit. 😉 (Unfortunately Footloose is back up to $7. Still a decent deal. That’s why you watch the $2.99 bin and grab them when you see them.)

Oooh! Just found a Barenaked Ladies Hits album in the bin as I was typing this. Cha-ching!

I also picked up two Mat Kearney albums (also back up to $8 now). Yep, my taste in music is super eclectic. It goes all over the board on rock and pop. Old and recent, foreign and American.

Postscript, there are also $5 albums and $7 albums. Go have fun!

WHAT CAN BE AN AMAZON TRAP

Occasionally Amazon offers movies for $7.99 or so. These I can access via my Roku and I love that Amazon keeps it on their server for me. But these are so few and far between. The threshold on digital movies for me is exactly $10. $9 is pushing it, but I might be persuaded, if it’s really, really good, but $10!?! Ludicrous!

I’m serious. We don’t get bonus features, or behind the scenes, or any of that DVD stuff, so why would I pay $10 for just the movie? I’m hoping this will change in the near future. I hate how they charge you extra for HD too. Cuz it’s so different to render it as HD vs. SD? (I render stuff almost every day. It’s not.)

Either way, Amazon will still be claiming a large part of my income. *sigh* It’s a love/hate relationship.

I know some of you are addicted to Amazon? Anything that’s been trapping you lately? Or are you one of those rare creatures that never buys anything from Amazon? How do you resist the temptation? Let us know on all this below!

I’ve been thinking about buying an electric guitar for a while now. I have a beautiful Fender acoustic electric I’ve owned for nearly 20 years, but there are some tunes which just sound better on the electric. (Like the blues, for example).

But I wanted to start cheaper and see if I would use it and love it as much as a decent electric guitar would cost—a beginner guitar, if you will. So I decided on a Squier starter kit. These are the types that come with a guitar and amp. When I was looking at a used Gibson online (the Maestro), I came across the review of a musician who said the Maestro was crap and a better starter guitar was the Squier. After looking at several different reviews, most people agreed this was a pretty decent guitar for the price (some even said they thought it was really great for the price) so I went for it.

I got it last night and had a chance to play with it a bit. The amp was pretty decent for a 10-watt and the guitar sounded fairly decent. However…there was an issue with the fretboard. On the 7th and 8th frets sometimes the 8th fret sounded exactly the same as the 7th and it was a bit tinny. Needless to say I was not a happy camper. 😦 I packaged it all back up to ship back to Amazon. Hopefully my replacement will be just fine. The thing is, no one mentioned a problem on the reviews, and many claimed to be lifelong musicians. The next guitar I suppose will tell. I know it’s not going to be the best thing I’ve ever played in my life, but certainly having the frets work like they should isn’t too much to ask—especially coming from a company like Fender.

I have been playing the acoustic a lot lately to essentially clear out my mind while editing. Even if I have all the time in the world to edit, there’s only so long I can go before I need a break. Music certainly helps with that, which is what inspired me to make the purchase in the first place. I think I needed to test out the waters with a starter guitar to see if I really want to invest in something major. I don’t get the replacement until Friday, so no conclusive evidence yet. I did plug in the acoustic for a few minutes, and it was nice to have something to bring up the volume a bit. Hopefully Friday will be less disappointing.

Something I always found difficult to play on my acoustic was the Marty McFly opening for Johnny B. Goode, mostly because of a tough string bend toward the end. My fingers are little and girly (I’m a girl after all) so it’s hard to push them up. The electric makes it a little easier, and it just sounds cooler. When I get reasonably well-practiced, I’ll see if I can’t post a little video here on the blog. I’ve also teased my roommate about one day waking her up with Van Halen’s Top Gun theme. That is going to happen, people. Some day…

Do you dare me to find that outfit? I might have something close.

As you all know, Pitch Wars is happening today. I’ll update the My Novel section of my blog as soon as I have any news. I doubt there will be offers of representation today (not that I’m ruling it out) but I think there will be requests for more material, and I’m hoping I’m among those in the request pack. I linked yesterday to all the blogs hosting the pitches, but you can find mine here.